The frontrunner for the Republican presidential nomination used his Twitter account to apparently endorse a quote by none other than Italian fascist Benito Mussolini. This would hardly mark the first time Donald Trump raises more than a few eyebrows by retweeting a follower. But this time around the whole thing is rather striking as the account is a pretty clear parody that likens Mussolini to the real estate mogul and even goes on to attribute the well-known quote to Trump. “‘It is better to live one day as a lion than 100 years as a sheep.’ –@realDonaldTrump #MakeAmericaGreatAgain,” reads the tweet.

The account in question is “ilduce2016” has as its Twitter avatar a composite image that puts Trump’s hair on Mussolini’s head. Mussolini’s followers often referred to him as “Il Duce.” The whole thing may be a bit subtle if you consider that earlier this year, Trump retweeted a user named “WhiteGenocideTM”—twice.

Update at 11:45 a.m.: Gawker revealed it was their doing. The website created a bot in December to periodically spit out Mussolini quotes and credit them to Trump, hoping the presidential hopeful would eventually retweet them. "At the time of the account’s creation, Gawker Media Executive Editor John Cook expressed some concern that the joke behind the account was far too obvious, and wouldn’t trick anyone but a complete idiot," writes Gawker's Alex Pareene.

gangsterofboats
reply
So? Zach De La Rocha named a band after that quotation.

Stadium spending is bad for humans and other living things, Thursday edition by Neil deMause
Friday January 15th, 2016 at 6:49 AM

Happy National Notice That Stadium Subsidies Are A Bad Deal Day, everybody!

Tune back in tomorrow, when some city official somewhere will tout the massive economic benefits available from building a new sports venue! They will fight eternally…

olympia
reply
They're used for a variety of things besides NFL games. Wrestlemania was at Levi's this year in addition to a host of concerts, Sharks vs LA game, and even some highschool football games.
SF Bay Area

NFL stadiums are the worst thing to plop in a middle of a city. They are only open for 10 days a year. And that 2 of those days are preseason games
Chicago

US inquires why ISIS has so many Toyota trucks by Greg Migliore
Saturday October 10th, 2015 at 12:26 PM 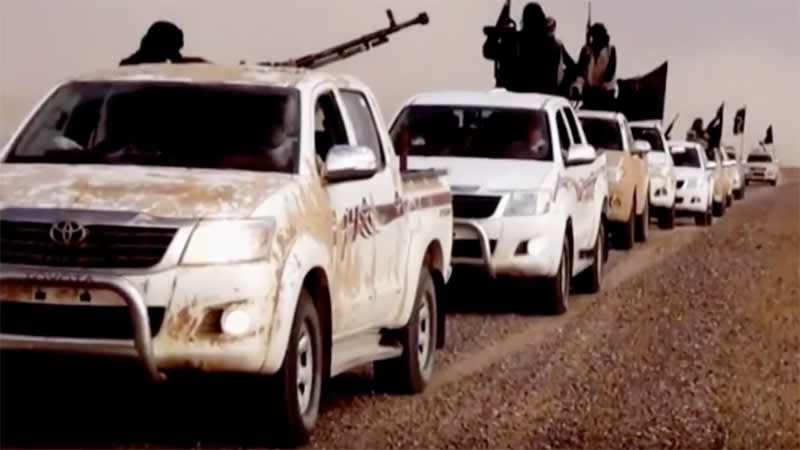 US officials are asking why ISIS appears to be using a large number of Toyota trucks, ABC News reports.

Continue reading US inquires why ISIS has so many Toyota trucks

US inquires why ISIS has so many Toyota trucks originally appeared on Autoblog on Tue, 06 Oct 2015 17:03:00 EST. Please see our terms for use of feeds.

olympia
reply
@farmjope There was an effort to ban Toyota sales to ISIS about a year ago and now ISIS suddenly has a bunch of brand new ones.

If I remember correctly, they prefer them because they are easily modifiable for weapon mounts.
SF Bay Area

America is jealous that they are not using trucks built in the USA.
Vancouver Island, Canada

LOL, wtf? Why do you think? They are built to last longer than other trucks and are more popular overseas so there's going to be a lot more of them. It's like the AK47

This helpful guide about what 200 calories looks like reminds us just how much healthy food we’re giving up each time we have a treat.

yeah, asshole. how dare you eat an order of french fries when you could have literally shoved 22 banana peppers in your fucking face-hole. what a piece of shit you are.

It’s back. The infographic that says “Protein? Storage? Cost? What are these strange things you speak of?”

P sure that much of any of that fruit would give me the shits tbh.

BUT ASK FIRST. I know it’s really hard, and I fuck it up too and slip into “yay the way I eat!” mode sometimes, but hey. Try. Keep trying. People know what works for them. If they want advice, they’ll ask. This condescending shit like “oh maybe you just aren’t aware of how calories work” is bullshit on SEVERAL levels and harmful.

(Also, people asking for weight loss advice don’t actually want to hear answers, in my experience. They want that gross ‘do this awful thing for 2 weeks and somehow magic’ diet industry lie. Sorry, can’t help you, I don’t know anything about that. All I know is how to do stuff that makes my brain feel more stable. V unglam.)

olympia
reply
I see this come up and I agree with the comments, except one that bothers me: those are not banana peppers! Those are mini bell peppers. They are very very very mild (not spicy) and they taste good with hummus :)
SF Bay Area rewatching s1 for like the 100th time--at what point does all the brilliant animal sight gag stuff (eg the croc wearing crocs) get added? is it like, we need to have a croc wearing crocs, where can we fit this in? or do you start out by needing someone to guard the food and say let's do a crocodile--hey, he should wear crocs? or some kind of total afterthought, or something else entirely? thanks. love the show, my favorite of all time.
Friday January 9th, 2015 at 11:20 AM

Hello! I am going to answer your question, and then I am going to talk a little bit about GENDER IN COMEDY, because this is my tumblr and I can talk about whatever I want!

The vast vast vast majority of the animal jokes on BoJack Horseman (specifically the visual gags) come from our brilliant supervising director Mike Hollingsworth (stufffedanimals on tumblr) and his team. Occasionally, we’ll write a joke like that into the script but I can promise you that your top ten favorite animal gags of the season came from the art and animation side of the show, not the writers room. Usually it happens more the second way you described— to take a couple examples from season 2, “Okay, we need to fill this hospital waiting room, what kind of animals would be in here?” or “Okay, we need some extras for this studio backlot, what would they be wearing?”

I don’t know for sure, but I would guess that the croc wearing crocs came from our head designer lisahanawalt. Lisa is in charge of all the character designs, so most of the clothing you see on the show comes straight from her brain. (One of the many things I love about working with Lisa is that T-Shirts With Dumb Things Written On Them sits squarely in the center of our Venn diagram of interests.)

NOW, it struck me that you referred to the craft services crocodile as a “he” in your question. The character, voiced by kulap Vilaysack, is a woman. It’s possible that that was just a typo on your part, but I’m going to assume that it wasn’t because it helps me pivot into something I’ve been thinking about a lot over the last year, which is the tendency for comedy writers, and audiences, and writers, and audiences (because it’s a cycle) to view comedy characters as inherently male, unless there is something specifically female about them. (I would guess this is mostly a problem for male comedy writers and audiences, but not exclusively.)

Here’s an example from my own life: In one of the episodes from the first season (I think it’s 109), our storyboard artists drew a gag where a big droopy dog is standing on a street corner next to a businessman and the wind from a passing car blows the dog’s tongue and slobber onto the man’s face. When Lisa designed the characters she made both the dog and the businessperson women.

My first gut reaction to the designs was, “This feels weird.” I said to Lisa, “I feel like these characters should be guys.” She said, “Why?” I thought about it for a little bit, realized I didn’t have a good reason, and went back to her and said, “You’re right, let’s make them ladies.”

I am embarrassed to admit this conversation has happened between Lisa and me multiple times, about multiple characters.

The thinking comes from a place that the cleanest version of a joke has as few pieces as possible. For the dog joke, you have the thing where the tongue slobbers all over the businessperson, but if you also have a thing where both of them ladies, then that’s an additional thing and it muddies up the joke. The audience will think, “Why are those characters female? Is that part of the joke?” The underlying assumption there is that the default mode for any character is male, so to make the characters female is an additional detail on top of that. In case I’m not being a hundred percent clear, this thinking is stupid and wrong and self-perpetuating unless you actively work against it, and I’m proud to say I mostly don’t think this way anymore. Sometimes I still do, because this kind of stuff is baked into us by years of consuming media, but usually I’m able (with some help) to take a step back and not think this way, and one of the things I love about working with Lisa is she challenges these instincts in me.

I feel like I can confidently say that this isn’t just a me problem though— this kind of thing is everywhere. The LEGO Movie was my favorite movie of 2014, but it strikes me that the main character was male, because I feel like in our current culture, he HAD to be. The whole point of Emmett is that he’s the most boring average person in the world. It’s impossible to imagine a female character playing that role, because according to our pop culture, if she’s female she’s already SOMEthing, because she’s not male. The baseline is male. The average person is male.

You can see this all over but it’s weirdly prevalent in children’s entertainment. Why are almost all of the muppets dudes, except for Miss Piggy, who’s a parody of femininity? Why do all of the Despicable Me minions, genderless blobs, have boy names? I love the story (which I read on Wikipedia) that when the director of The Brave Little Toaster cast a woman to play the toaster, one of the guys on the crew was so mad he stormed out of the room. Because he thought the toaster was a man. A TOASTER. The character is a toaster.

I try to think about that when writing new characters— is there anything inherently gendered about what this character is doing? Or is it a toaster?

ASK ME QUESTIONS ABOUT BOJACK HORSEMAN.

olympia
reply
It's not the funniest thing in the world, but it is still pretty good and surprisingly meaningful.
SF Bay Area

Courtney
No Scott no do not watch the show that is the wrong takeaway I wish my tags transferred to Newsblur from tumblr so you could see that is tagged this "I do not at all like this show but I like this ask". The show is tedious retread offensive comedy about the problems of a narcissist man and people trying to put up with him. Just watch Archer if you want to see that.

smadin
ah ha, OK. well, it's a good response even if the show is bad!

WorldMaker
I think your tolerance of Will Arnett is the defining characteristic of whether or not you like Bojack Horseman. It's like that TV show he did (that no one but me watched) with Keri Russell, who has been split into Aaron Paul and Allison Brie, and with Peter Serafanowicz replaced by Paul Tompkins as a golden retriever named Mr. Peanutbutter. The spin here is that it is FULL of 80s/90s sitcom references and callbacks. I've been enjoying Bojack Horseman, but I'm in its demographic...
Next Page of Stories